admin
No Comments
Forbes.com by Tom Teicholz
These days, when so much of our time, energy and emotions are bound up in all that’s wrong in our world it is imperative to recognize and call out the good. So, when you have the chance to celebrate the wonderful good works of individuals such as Herb Alpert and Lani Hall, and that of an organization, The Herb Alpert Foundation, and The Herb Alpert Awards in the Arts (HAAIA) who for 25 years have supported mid-career artists in Theater, Film, Visual Arts, Dance and Music with unrestricted prizes of $75,000 each – and celebrate their outstanding executives Rona Sebastian and Irene Borger – suffice to say, a big party is very much in order.

Although the Herb Alpert Foundation is located in Santa Monica, California, and has for many years had its annual awards ceremony at the foundation’s headquarters in Santa Monica, for the 25th Anniversary the party moved to New York City and a gala event held May 13th at the Caldwell Factory in the Chelsea neighborhood. Over 250 prominent artists and arts supporters attended the evening.

When you invite all the award winners over 25 years (and more than 70 of them show up) as well as the panelists who chose them what you get is …. a room of very talented people. 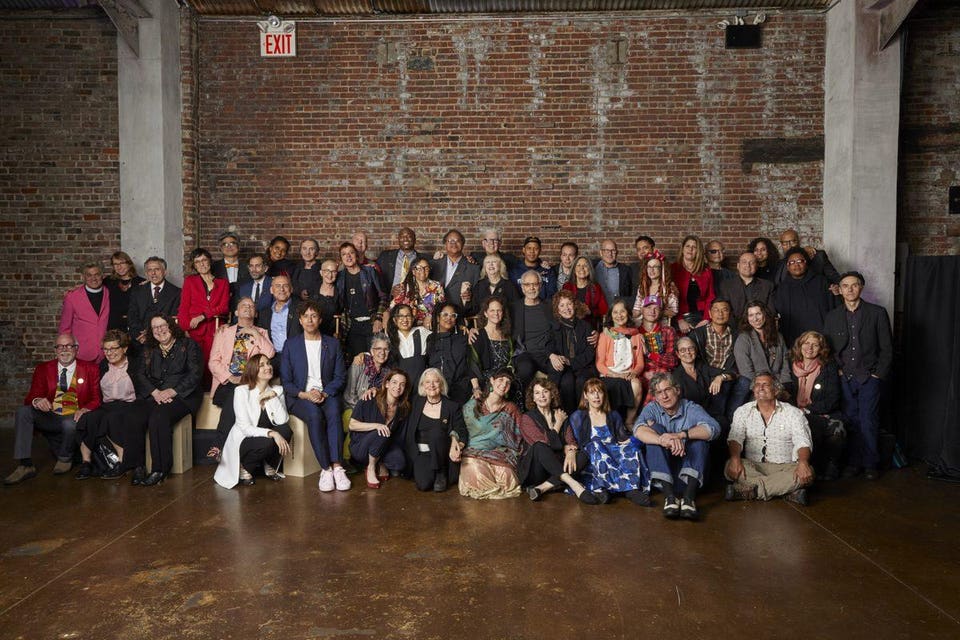 As Irene Borger, , Director, Herb Alpert Award in the Arts, said, “Over the years the distinguished Alpert Award panelists have selected artists who have gone on to extraordinary careers after winning the Herb Alpert Award. They include Zhou Long and Julia Wolfe, Pulitzer Prize winners in Music, and Suzan-Lori Parks, a Pulitzer winner for Drama. The many other prizes prestigious Herb Alpert Award winners have received include 12 MacArthur Fellowships, and 33 Guggenheim Fellowships.” Not too shabby.

There was a prolonged cocktail hour as honorees arrived and commemorative group photos were taken. Having that much brilliance in the room carbonated the animated conversations throughout the room.

Daniel Fish, the Tony-nominated director of the Oklahoma revival told me it wasn’t so much the money but the affirmation he received. Winning the Herb Alpert gave him the confidence to stay true to his vision. When he was challenged regarding certain design or set matters as being too expensive, he knew that if he needed to he could pay for those himself. “That meant a lot,” Fish said.

One honoree described how, not having health care, the year they needed to spend more than $50,000 on life-saving treatments for their child, the award made all the difference in the world. 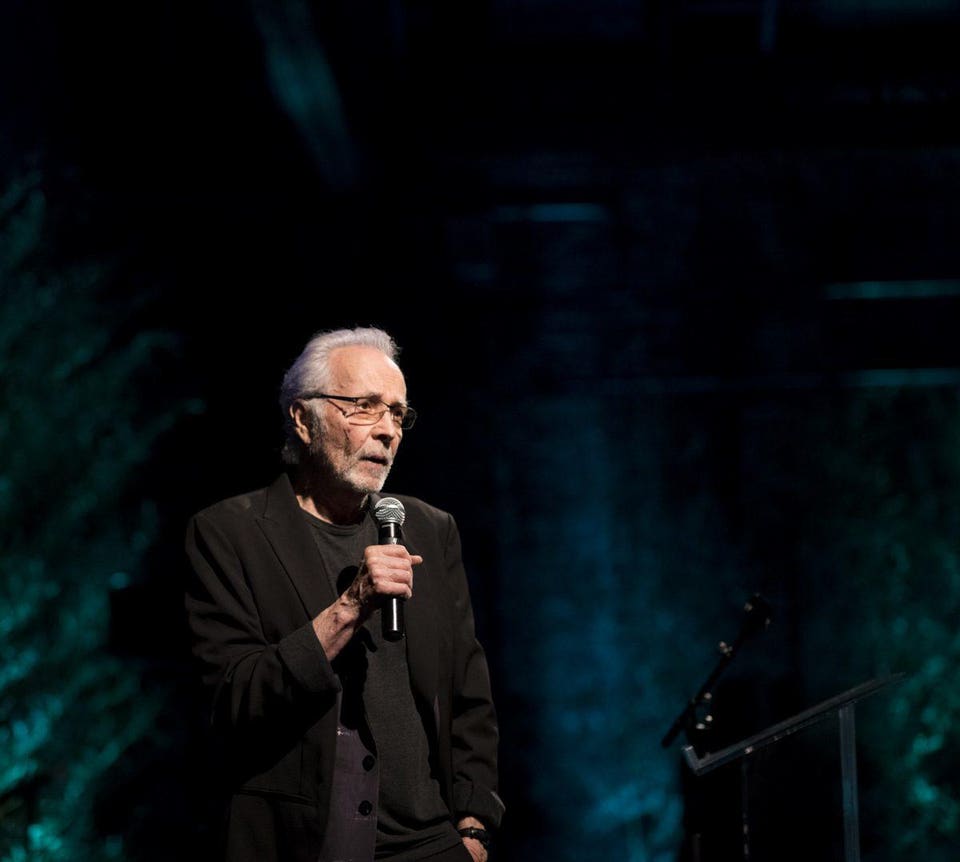 I managed to grab a moment with Herb Alpert himself. I was struck that the Awards began during the Reagan Administration where funding for the Arts was being cut, and one could argue that today, 25 years later, things were only worse. So my question was what impact did Alpert feel the awards have had. “The Artists who’ve received these awards help change the climate in this country,” Alpert said. “Little by little.”

Alpert said that helping artists is part of his DNA whether it was working with them at A&M Records or in his philanthropic activities that include arts education for children at the Harlem School for the Arts and other elementary and middle schools, funding free tuition for music students at LA City College, or endowing the music program at UCLA, or the Herb Alpert Awards that we were commemorating that night which benefit mid-career artists. Alpert said that given the business and financial success he’s achieved he wanted to do more than “buy a Monet and hang it on my wall.” He much preferred “Ito do something creative and important with the money that I’ve been blessed with.”

Alpert was proud of the fact that with relatively little funds, he’d been able to achieve great impact in the lives of artists. Finally, Alpert said these awards were an expression of his own love for Art and respect for Artists. “I love the mystery of Art.” “Artists, Alpert said, “Are all looking for the same thing. Freedom… and Truth. To be honest as an artist and honest as a human being. We need more of that in this world and in our country.”

Dinner was served at long tables that traversed the cavernous former garage (also rumored to have been, more recently, Annie Leibovitz’s studio). And there were speakers. 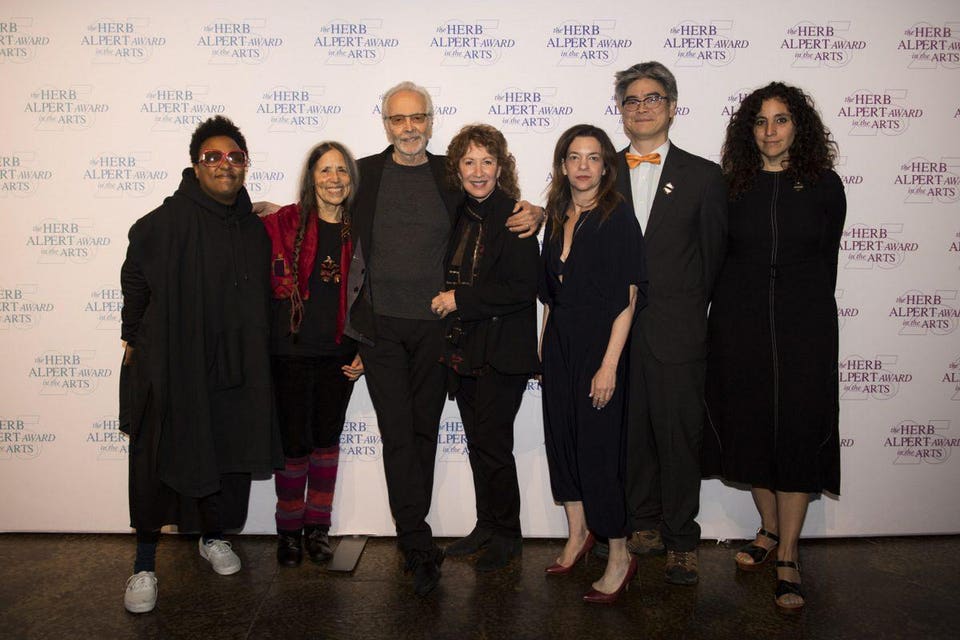 Special words of appreciation were given by Bill Moyers, who at 85 retains the Southern accent and preacher-like cadence that generations of TV news and specials watchers have come to take as the gospel itself. Moyers recalled that upon first hearing “The Lonely Bull” played on the radio, he pulled his car over on the DC freeway to jot down the name of the artist, Herb Alpert. And how during the following year, when Moyers was press secretary to President Lyndon B. Johnson, Alpert played three times for the President – twice at the White House and once at the Press Correspondents dinner.

“Someone recently asked me to define Herb Alpert in one sentence,” Moyers said. “I answered: “Herb Alpert is a man with a golden horn, a golden touch, and a heart of gold, and with these gifts he brings joy to the world.” 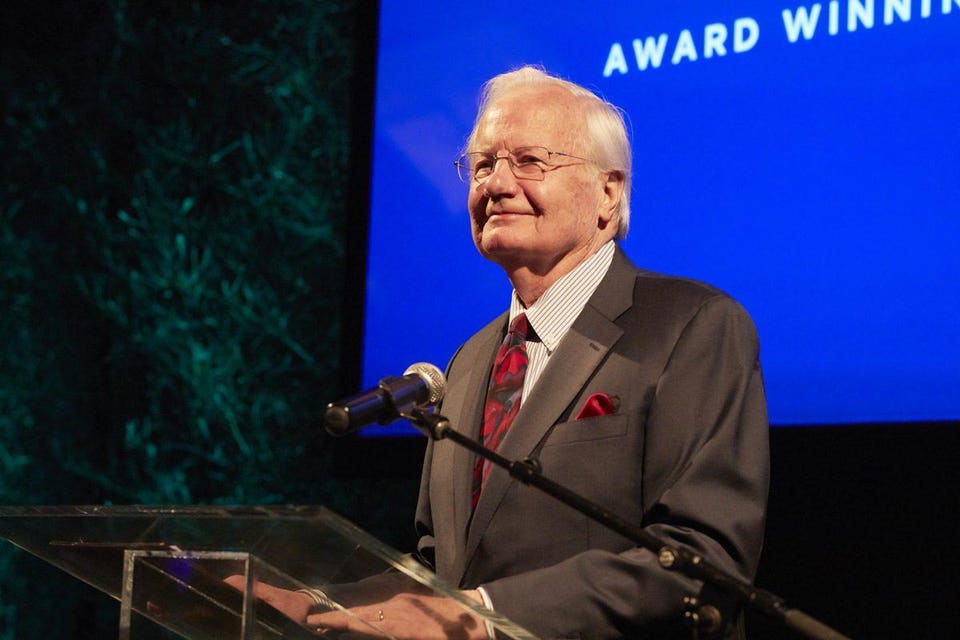 Moyers elaborated: “When I played it in the marching  band, I realized the trumpet is just brass tubing bent twice into a rounded oblong shape — until you send your breath through it.  What you let into the world comes from inside you.  What’s inside Herb Alpert is compassion, kindness, and an eye for seeing the marvelous in the mundane — and the best in you. If that’s not the work of the soul, I don’t what to call it.”

“In a brilliant essay about Herb,” Moyers said, “the historian Peter Cole reminds us that he was born of Eastern European Jewish immigrant parents who settled in a multicultural working class enclave in Los Angelos…vastly different peoples live near each other…cultures meet and mesh….and produce something new and wonderful.” — Herb’s wonderfully mixes and melds until it has become “proof that borders are meant to be crossed and sometimes even ignored. Proof that it’s better to tear down walls than build them.”

In conclusion, said Moyers: “The ancient Hebrews believed it was the trumpet that brought down the walls of Jericho.  So Herb takes down walls that stood with people who had different roots, came from different cultures,  speak different tongues — and are joined by feeling hearts. “

Amen to that. One needs to hold fast to those evenings, when artists sparkle, conversation crackles and trust the world is warmed by artists supported by deep-feeling philanthropists and fellow artists to do work that one can only hope, as Alpert himself, “Changes the climate in our world and in our country.”

Tom Teicholz is an award-winning journalist based in Santa Monica, CA and co-host of “The Buried Lede: Beyond the Bylines,” a podcast about journalism