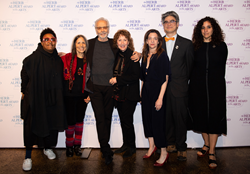 On May 13, 2019 Herb Alpert and his wife Lani Hall Alpert and their Herb Alpert Foundation hosted a celebration at the Caldwell Factory in Manhattan honoring 25 years of Herb Alpert Award in the Arts (HAAIA) winners and panelists.

Prominent artists such as Vijay Iyer (panelist) and George Lewis (panelist/winner) and legendary broadcast journalist Bill Moyers paid tribute to the awards program and Herb Alpert for his unwavering support of the arts as well as his impact on American music, culture and their own careers. Past winners Derek Bermel (music), Joanna Haigood (dance) and Bill “Reverend Billy” Talen (theatre) gave performances.

The HAAIA recognize artists working in Dance, Film/Video, Music, Theatre and Visual Arts who are risk-takers using their talent, vision, and labor to make something that matters within and potentially beyond their field. The outstanding candidate in each genre receives an unrestricted prize of $75,000.

“We are gratified,” said Herb Alpert Foundation President Rona Sebastian, “to celebrate with CalArts the shared vision of 25 years of The Herb Alpert Award in the Arts. Under the exemplary direction of Director Irene Borger, this program has reached far and wide into the arts community and is appreciated for its high level of compassion, sensitivity, and respect for individual artists. This unique grant opportunity has become an important milestone for mid-career artists to be recognized by their peers, and often is a defining moment leading toward the next level of their careers.”

CalArts President Ravi Rajan added, “Artists need space and time to create models of what’s possible in the world. CalArts was founded to focus on incubating artists, and for the past 25 years it has been amazing to partner with Lani Hall and Herb Alpert to do just that. I can’t imagine the arts without them.” CalArts has administered the prize since its inception in 1995 and also offers awardees a one week residency.

“Herb Alpert had a hunch that a prize to artists—artists who took risks—could make a difference to artists, certainly, and maybe even in the world. He said: “What if?” – the core of creativity. The artists the Herb Alpert Award honors and supports not only ‘think outside the box,’ they think: What Box?” notes Irene Borger, Director, Herb Alpert Award in the Arts. She describes why the 2019 panelists chose these five artists:

PAM TANOWITZ / DANCE
“The Dance panel has selected choreographer Pam Tanowitz for her unwavering commitment to her uncompromising artistic vision, rigorous sense of craft and composition, and for beginning again with each new work. They value her musicality, wit and poetry, her investigation – and disruption – of traditional forms, and her generous, humane and fully collaborative practice.”

BEATRIZ SANTIAGO MUÑOZ / FILM/VIDEO
“The Film/Video panel honors artist Beatriz Santiago Muñoz for her unique visual language that reveals the invisible, and magically locates the cosmic in the everyday. Always experimenting, she creates a sense of time unique to each film, tackles major ontological questions, constructing narratives that go way beyond themselves, and grapples with the long haunting questions of representation.”

MESHELL NDEGEOCELLO / MUSIC
“The Music panel celebrates composer, singer, bassist, storyteller, lyricist and producer Meshell Ndegeocello as a rare constellation in the artistic firmament, whose generosity of spirit defies the confines of genre and whose work dwells in both darkness and deliverance. Drawing power from its vulnerability and unflinching emotional honesty, she renews their faith in the transformative power of art.”

LLOYD SUH / THEATRE
“Playwright Lloyd Suh was selected by the Theatre panel for his adventurous spirit, thrilling theatrical imagination, brilliant sense of play, and the way he approaches each work as a new form while constantly exploring questions of identity in America. They applaud his wholehearted support of his peers, and encouragement of emerging voices that are shaping a new generation of theatre makers.”

CECILIA VICUÑA / VISUAL ARTS
“Artist, poet and activist Cecilia Vicuña was named the Visual Arts prizewinner for her fearless explorations, uncompromising poetics, responses to today’s political, social, and ecological realities, unwavering feminism and commitment to indigineity with an integrity that is a model for younger generations.”

About The Herb Alpert Award in the Arts

The Herb Alpert Award in the Arts is an unrestricted prize of $75,000 given annually to five risk-taking mid-career artists working in the fields of dance, film/video, music, theatre and the visual arts.

The prize was initiated and funded by the Herb Alpert Foundation and has been administered by California Institute of the Arts since 1994. The Herb Alpert Award honors and supports artists respected for their creativity, ingenuity, and bodies of work, at a moment in their lives when they are poised to propel their art in new and unpredictable directions. The Herb Alpert Award recognizes experimenters who are making something that matters within and beyond their field.

For More Information on 25 years of the HAAIA, past winners and panelists, please visit:
herbalpertawards.org